This is my series on the Incredible Blogger Marathon Challenge. To know the answers to how, what and why, read my post : The beginning {IBMC 00/10}

IBMC #07: The News and Paper Challenge

This is my seventh post for IBMC. It involves picking up a news article and expressing your thoughts in regard to it.

The article I selected is:

So here’s my take on it.

We live in a world where Trump is declaring Twitter wars on a daily basis, where mother nature is punishing us with frequent hurricanes for not seeing the warning signs of climate change, where news on terrorism has somehow attained creepy normalcy, and where we are so caught up in a web (quite literally !) of nothingness that we hardly ever look beyond the world we know.

I have chosen this article for my post due to some very obvious reasons.

The mission was launched in 1997, 40 years after the first man-made satellite was put into an orbit around Earth, and 28 years after man first walked on the Moon. It was a technological marvel with a uniquely defined goal to solve the scientific mysteries revolving around our far-off ringed relative. It was well equipped with sophisticated instruments like cameras, spectrometers etc. to serve its several mission objectives. It not only aimed to study Saturn’s gaseous structure and atmosphere but also aspired to give valuable insights to its beautiful yet mysterious rings and its many known and unknown moons.

Reaching Saturn is understandably quite a herculean task. The powerful Titan-Centaur rocket did its job but the spacecraft needed a lot more incremental velocity to reach Saturn. It is also important to understand at this point that the amount of fuel carried on board is simply not solely enough for the spacecraft to maneuver its way to its final destination. And this is where the simple concept of planetary flyby and gravity assist comes to the rescue. Now when I say simple, I mean that the concept itself is easily understandable to a regular human mind. But believe you me, the equations behind the curtain are immensely complex. After all, It Is Rocket Science ! 😉 To cut a long story short, a planetary flyby involves flying around or close to another planet and taking advantage of its gravitational pull. The result is a “slingshot effect” that increases the velocity of the spacecraft and propels it closer to its terminal station. Cassini-Huygens went for an adventurous tour around the solar system, taking two such gravity assists from Venus, and then another one from Earth, followed by a quick stopover at Jupiter and then finally reaching Saturn 7 years after it was launched.

After arriving at Saturn in 2004, the Huygens probe was detached and dropped off at Titan shortly after. Cassini has orbited Saturn for over 13 years now and calling it a success would be underplaying its unparalleled contribution towards science. The mission fulfilled all its primary science objectives within 4 years of its time at the new home, so everything after that was just bonus. It would be impossible for me to detail each and every milestone achieved, so I briefly list the highlights here :

Enough with the science part, here are some of the amazing pictures Cassini captured : 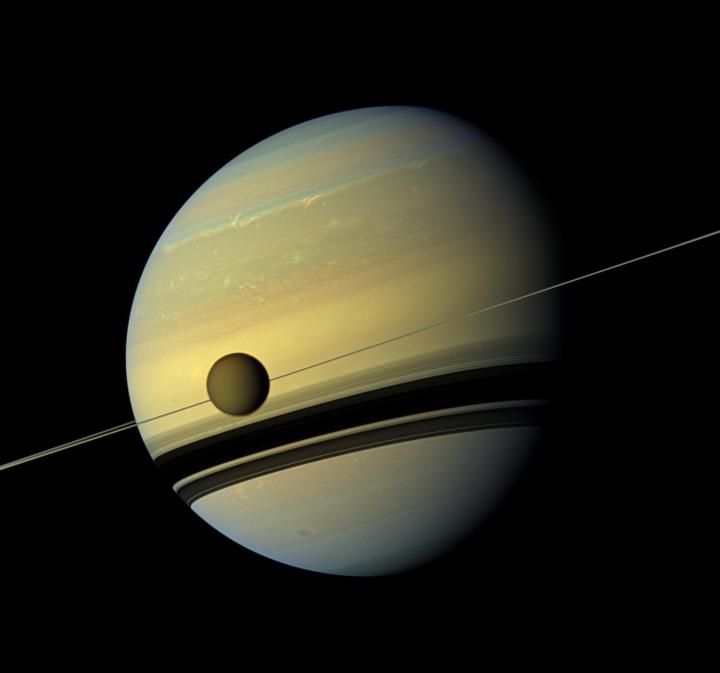 With its extended mission life ending this year and with dwindling fuel supply, the eventual end was inevitable. Protection of the Earth-like worlds (Titan and Enceladus) it discovered, made it mandatory for Cassini to sacrifice itself for a greater cause. In order to avoid the unlikely possibility of Cassini someday colliding with one of these moons, NASA has chosen to safely dispose of the spacecraft in the atmosphere of Saturn. This will ensure that Cassini cannot contaminate any future studies of habitability and potential life on those moons. In November last year, the spacecraft began a series of 22 dives that would eventually take it to the so-called surface of Saturn. In this process it also dove through the narrow gap between Saturn and its rings for the first time in April this year. Even at the end, it traveled successfully through unfamiliar territory, collected and processed valuable science data and delivered rewarding results about the composition of the rings.

Continuing on its suicidal plunge into Saturn, Cassini is estimated to hit Saturn’s atmosphere on September 15th 2017.

In less than 5 days from now, this astounding man-made marvel would be dramatically brought to its end.

Even in its final moments, the spacecraft would attempt to point its high gain antenna towards Earth and pass on whatever last minute information it decodes from the gaseous giant. Consequently, as it comes in contact with the atmosphere, it would tumble, disintegrate and eventually vaporize as it plummets towards Saturn.

It will finally be ONE with the planet it revolved around !

If you wish to read further, here’s a detailed timeline of the awesomeness that this mission has been about !

Also, while writing this post, this is the snapshot I took from the official NASA webpage for Cassini.

I must admit that I’m feeling a tad bit emotional ! 😦

Thanks for tuning in ! Looking forward to your valuable feedback !

I hope you enjoyed reading this as much as I did writing it !

Check out my other IBMC posts:

Join 157 other subscribers
Follow the drifting satellite on WordPress.com

Connect with me on