In this post series, I document my trip to Australia from inception to accomplishment !

Previously on Destination Down Under :

Destination Down Under #02 : Sealed the deal !

Destination Down Under #03 : A dreadful hurdle crossed !

Destination Down Under # 05 : Major Missing Happening !

Its been around 6 months since I returned from the land down under. 😊

Well, better late than never. So here’s my post on Melbourne!

Melbourne has been consistently ranked as the world’s most livable city for the seventh year in a row (2010 to 2017) by Economist Intelligence Unit. It is also known as the cultural capital of Australia.

This trip marked my third visit to Melbourne (2007, 2011 and 2017). Melbourne is and will always be a must on any of my trips to Australia as my sister stays there with her family since the last 13 years or so. Not just that, Melbourne is an extremely well settled, sophisticated, enterprising, fun, lively and welcoming city so I love coming back here again and again and I even love visiting the very same places after a gap of a few years. Being one of the biggest cities in Australia, it definitely deserves to find a place on your downunder itinerary.

Melbourne has a lot to offer; a beautiful riverside, a sprawling skyline, some nice parks and beaches; some mountain ranges; a little something for everyone!

Since my sister lives in a charming peaceful suburb a little distance from the city, and we had a lot of out-station trips planned for our vacation, we hardly spent a day or two in Melbourne city.

We took the train from her place to the city. The Victoria train network connecting Melbourne and its suburbs and the train and tram connectivity in downtown Melbourne is absolutely impeccable.

It took us about an hour to reach the city and our first stop was the majestic Flinders Street Station. This remarkable icon of Melbourne was completed in the early 1900s and was the first ever railway station in an Australian city. It is the busiest train station in Australia and once upon a time was the busiest one in the world. it is also presently one of the city’s most recognizable landmarks. 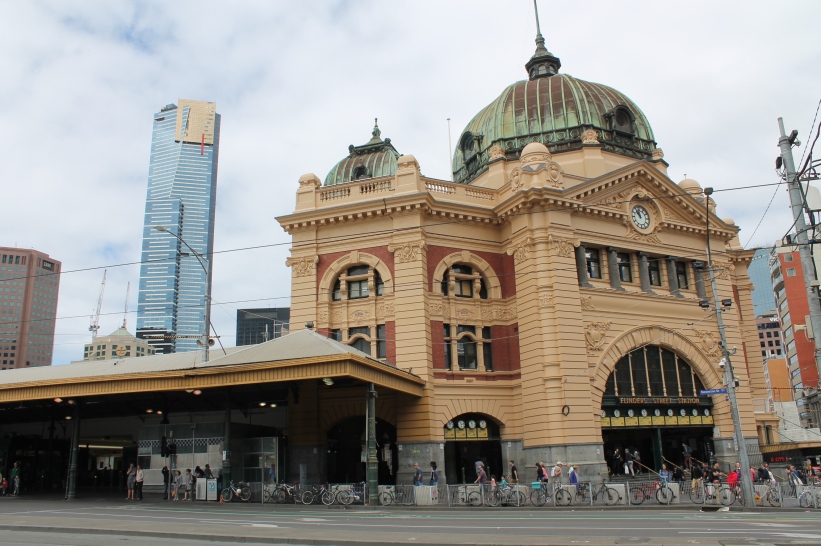 Right opposite to it, is Federation Square. Its a unique cultural precinct that hosts a variety of concerts or art shows and interesting events. The first thing to check out here is the underground visitor information center. It is huge and has a plethora of information about Melbourne and around regarding what to see, where to go, where to eat, how to travel etc. etc. You can even talk and take advice for your trip from the helpful staff there or pick up hundreds of free information brochures and pamphlets. You can find lots of information about Victoria also and some great day trip ideas for places near Melbourne like Ballarat, Philip Island, Great Ocean Road, Mornington Peninsula, etc. You can get all the street maps and transport network maps here for free. They also have lots of Melbourne merchandise if you’re the collector type (like me). But hold your horses as you would get cheaper stuff (fridge magnets, post cards, shot glasses, caps, shirts, pend and whatnots) elsewhere. We left the information center half an hour later with all the important maps and much-more-than-required brochures for trip options.

Initially we thought of taking the HOHO (Hop On Hop Off) sight seeing bus but then figured that we’d rather do it on the wonderful tram network of Melbourne. It is the world’s largest urban tram network. We were loaded with lots of information and determination to explore the city.

We happened to catch a live trapeze show there and thoroughly enjoyed the street performer’s witty half an hour pole balancing act. It was also Christmas Eve so there were many people gathered near the huge Christmas Tree at the square.

Next we took a relaxed and peaceful stroll along the banks of Yarra River. I remembered coming here with my brother and sister in 2007 and with my dad in 2011. There area few lovely restaurants and cafes to soak in the serenity by the river and if time permits, you could also take a river cruise. 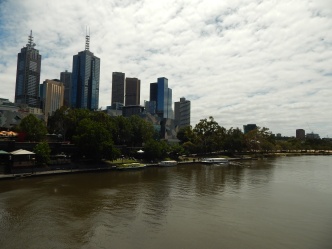 Since my dad is a passionate cricket lover we took a guided tour of Melbourne Cricket Ground and cricket museum when we visited Melbourne in 2011. This time we decided to skip the tour and booked family tickets for a BBL T20 match at MCG for a few days later. I’m not a big cricket fan but I must admit it was great to witness all the thrill and excitement of a live match. The whole atmosphere was amazing and even though I showed little or no interest in the game, I had an absolutely wonderful evening with family. Just before the match, there was an attempt to break the world record for the max number of people simultaneously blowing bubbles for an environment friendly cause to promote #bubblesnotballoons. The record couldn’t be broken but it was a great attempt nonetheless. 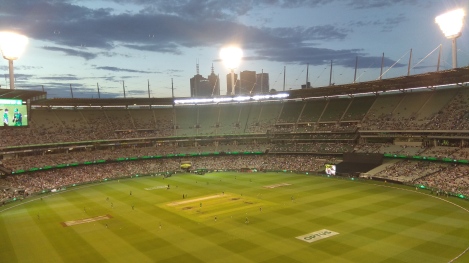 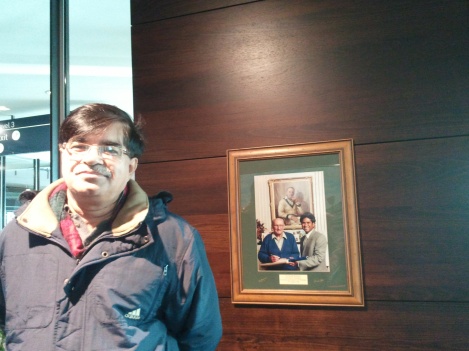 Our next stop was the Eureka Tower. You can easily spot the iconic skyscraper with the gold top, wherever you are in the city. We wandered through the streets and finally made it to Eureka. There’s a 20 AUD entry fee which takes you to “Eureka Skydeck 88″, the observation deck on the 88th floor. It is the highest public vantage point in a building in the Southern Hemisphere at 285 m (935 ft). They also have something called “The Edge” experience, where you pay an extra amount and are in a glass cube which is pushed outside the edge of the building, with clear glass floor. They also have a non-air conditioned balcony sort of a thing where you can experience the mighty winds at that height. It’s nice to have a bird’s eye view over the city. I thoroughly enjoyed staring down at the tiny cars, trains and boats roaming around the minute streets and roads. At that height, the winding river running through the busy and bustling city and the vast ocean meeting the blue sky are a sight to behold. 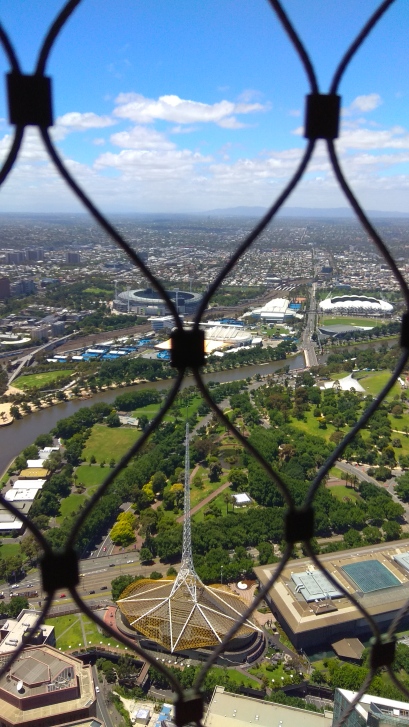 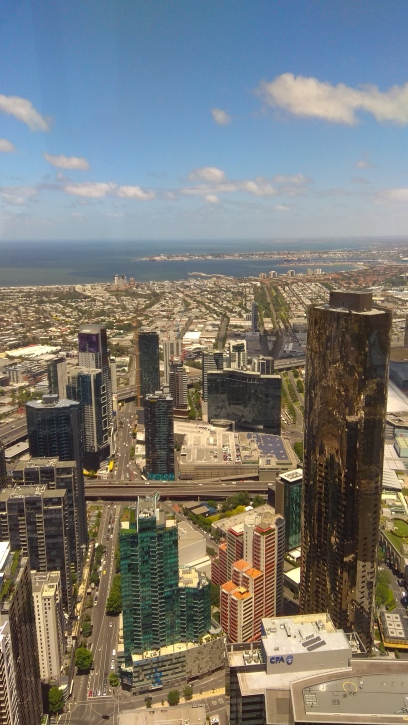 We walked around the city for a while and then sat at the river bank looking at scores of sea gulls playing around. We then went to Crown Hotel and tried out our luck at gambling. There’s an hourly show at the hotel around Christmas time which was really beautifully showcased. We decided on what we would spend at the casino and left in an hour or so after losing all of it.

Next we headed to Melbourne Sealife Aquarium which hosts Southern Ocean and Antarctic sea life. Generally speaking, I’m anti zoos and aquariums and do not appreciate seeing animals in cages or arenas. But Melbourne Sealife has a wonderful rescue and conservation program and interactive events to educate kids and people about the aquatic life of Australia. They have divided the entire place into many zones and my favorite part was seeing the cute penguins. 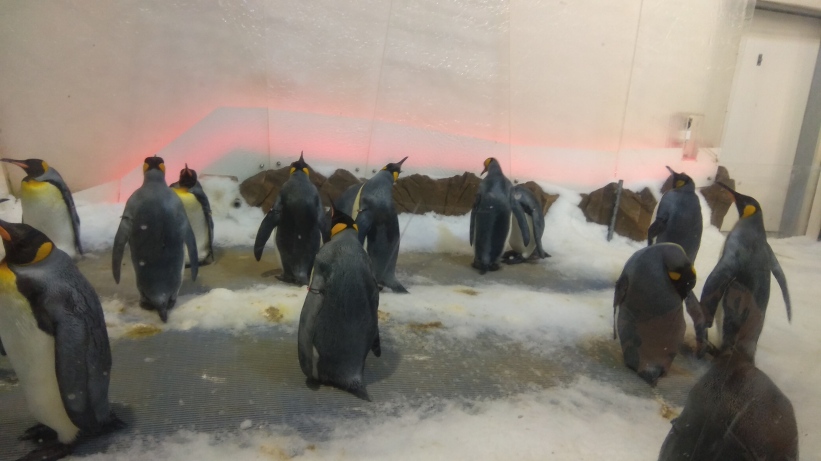 After an hour or so, we had our lunch in the city, roamed around a bit, took a loop in the city circle tourist tram. We then headed back home for Christmas Eve dinner.

On my previous visits, I have also been to the Melbourne Museum, Queen Victoria Market and St. Kilda beach and Docklands.

Some other things close to Melbourne, ideal for a day trip are:

Mornington Peninsula has lots of interesting places to visit. We visited Moonlit Sanctuary Wildlife Conservation Park which is home to a variety of Australian flora and fauna. We were happy to spend some quality time with the kangaroos while feeding them. We also visited the Mornington pier and Frankston beach around sunset. On an earlier visit we had taken an hour long ferry from Sorrento to Queenscliffe.

Skyhigh Dandenong is a lovely park area ideal for family picnics at the top of the mountain with fantastic panoramic views of the city. The drive to the top is very scenic and there are a few attractions at the summit like the Giant’s Chair, English Garden, Maze etc. to enjoy with family. 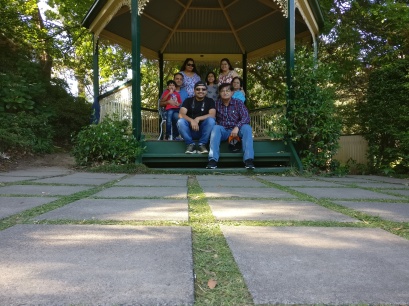 Philip Island hosts the famous Penguin Parade at Phillip Island Nature Park, in which little penguins (also called fairy penguins) come ashore in groups, attracts visitors from all over the world. This is one of the few areas where this species of penguin can be seen. We watched the parade back in 2007. The cute little penguins return to the beach late in the evening or at night and wobble their way back home.

Mt. Buller, Mt. Baw Baw and Lake Mountain are ski resort towns near Melbourne and are perfect to experience snow. Both my earlier visits were in the winters so we visited Mt. Buller and lake Mountain for snow play. 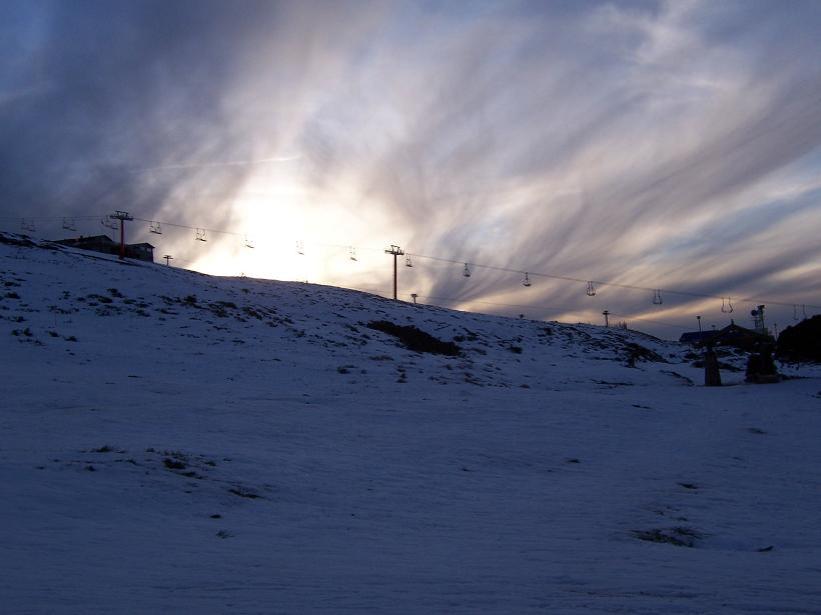 Toorongo Falls is situated in a beautiful protected forest area and is wonderful for an afternoon hike. The area is lush green and the waterfall is very pretty.

That’s it for now.

Don’t think that I forgot about Great Ocean Road. It is the most breathtaking short trip you can take around Melbourne.

I omitted it on purpose because it deserves its own separate post. So I’ll be back with more. Soon. 🙂

Greetings Earthlings ! I am Smiti from India. I truly believe in living up to my name which literally translates to 'smile'. I'm an aerospace engineer working in Germany. I have been associated with a variety of satellites in the last decade and enjoy working in the exciting and challenging space domain. Before I leave the sphere of influence of Earth and wander off into limitless skies, I would like to traverse the home planet far and wide! View all posts by Smiti